One question: is it the bees knees??? Yes it is.

At this point every other review is going wax philosophic about how great Windows 7 is, how its what Vista was supposed to be. And then go on to debate whether it should be a Service Pack instead.

I’m going to try avoid all those issues. But I will say this. Microsoft think that it should stand alone as it own OS, and that’s how I’m going to review it.

First off. the problems I’ve had with it have been few and far between.

Now, every time a close the lid and then re-open it, the screen refuses to display the screen again. Its really annoying and requires a restart. The fix is simple – change the power options to do nothing when I close the lid. And it works like a charm now.

Second, IE8 RC wont install here. Don’t ask. But and earlier version of IE8 is installed. No solution as far as I know and I use Firefox anyway.

Third, iTunes runs quite well. Its faster. but not much else. however, it hangs on exit when its saving the iTunes library. And there’s not much choice here but to kill it with task manager.

You can get around this problem, perversely, by running iTunes as an Administrator. I suspect that the UAC tweaks are  the culprit here.

Fourth, every now and again 7 will hang at the shutdown screen (when it says “Shutting down”). This is annoying because you’re not quite sure what’s going on.

Finally, and i don’t know why this happens, the Adobe Bridge Photo Downloader no longer has the “Convert to DNG” option.

Before everyone leaves comment, I have installed all the updates delivered to me. And Adobe Bridge tells me its version 2.1.1.9. Since I convert everything to DNG on import, this is really a disaster.

Most programs, actually run in Windows 7 quite well. I did have a problem with Windows Live and Visual Studio 2008 SP1 but hey, all installed eventually.

7 is done right in a number of ways. The taskbar is particularly important as its the primary focus of any interaction with the OS.

On first use, telling the difference between pinned and active icons can be difficult. Its a very subtle UI cue there.

The Icons and notifications are better and never become too cluttered. Handling overflow is done particularly well.

At the bottom right of the taskbar, a little area sits on its own, separated from the rest of the taskbar. Clicking on this shows the desktop. However its not immediately obvious what this is for.

The Start Menu isn’t visually different from Vista’s. There are subtle UI cues however, that give away further functionality.

Programs that have been used have arrows next to them. Clicking on this arrow give the documents recently used by this program. the time saving nature of this cannot be over stated.

The search box now says “Search programs and files” instead of start search. Its more obvious about the function of the search box, and encourages users to use it more. This is one of my favourite features of the Vista-esque UI ( i.e since Vista) 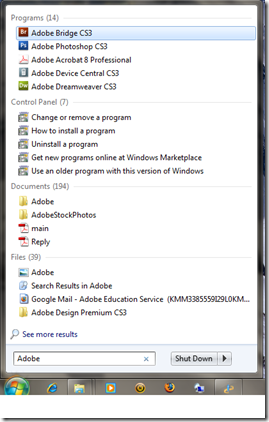 The Shutdown button is quite blunt as to what it does, differing from Vista’s Off icon. It is possible to change the functionality of these buttons in the power settings and this always confused me. text makes it so much easier to distinguish  what’s going on.

Both Paint and Wordpad have the new Ribbon toolbar. this makes them much better as applications. 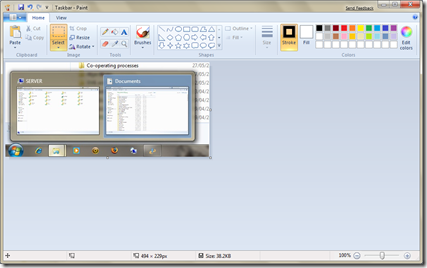 I tend to use paint quite a lot for situations when its not worth firing up Photoshop or Illustrator. Even in the few times I’ve used it, the Ribbon toolbar makes it so much better to use. and its not crappy old paint anymore either.

A few nice additions include the ability to Zoom right out ( right click to zoom out). This jumped out at me as being new.

Edit: Jordan Hofker pointed out on Freindfeed that its Wordpad not note pad. Many Thanks.

The changing backgrounds have been around for ages in third party programs or as part of the Power Toys stuff. however this time its baked right into the OS.

The themes feature is very powerful. Of course I can still remember how Microsoft offered Plus for windows 95. I was too much of a cheapskate to get it, but the idea of a theme has been around for a while.

This marks the first time (that i can remember, anyway) that themes are actually files you can share rather than an amorphous collection of settings.

Whereas before (pre-vista, anyway) settings and dialogs had to be navigated with a map ( literally), important dialogs such as for the mouse pointers, screen resolutions, screen saver and sounds are literally a click away. This will encourage people to get more out of their computers (even the not so computer literate ones).

More later this week as i continue exploring Windows 7.