So there’s a bit of a thing going on here where Robert Scoble is now using Twitter Lists for his RSS feeds.

I take issue with this, but I’ll say right now: to each his own RSS Reader.

What happens when one guy finds a good article – he shares it. So the paper gets passed round for people to read the article. I chose sunday for a specific reason – Sunday papers have the most insightful analysis based on a whole weeks worth of events.

Similarly on twitter, links get passed around for people to read becuase they are worthwhile reading.

Hence, i don’t have to follow every single twitter account, just those that pick out the most interesting or relevant news. The news will find me, where ever I am.

Blogs too will engage in similar behavior. At a much smaller scale tho. But a blog will not simply regurgitate the link. A blog will more often than not, provide some context about that link. By way of a response, a rebuttal, an agreement or adding fuel to the fire. Again, the news will find me where ever I am.

Friendfeed is a shining example in this regard. Its friend of a friend feature is something that Twitter retweets does not quite replace. Again, this allows the most relevant and talked about news show up in my stream – even if i’m not subscribed to that person. But this is based on a) the number of likes and b) the number of comments and c) how recent the last comment is.  This provides an awful lot of context to digest.

The usefulness of the FoaF feature cannot be understated. I’ve seen threads that go on for months, with comments constantly providing new information and developments. This is something that blogs rarely, if ever, do.

If you want more on Freindfeed versus Twitter and What Scoble has to say about it, Jesse Stay wrote a brilliant article here: http://bit.ly/5oZm1I

The news finds me where ever I am.

Lets go back to Twitter. Let me ask you this: How much context can be passed around in 140 characters, minus the link???

Granted, watchers of my tweet stream will see me posting Google Reader Shares that have exactly that. But you will also know that I will take the time to manually share a post with a recommendation.

I have a fairly modest amount of RSS subscriptions. About 250. Yet most of the news that is out there, I get.

In contrast, Scoble has 500 brands in his tech-news-brands list. There is a lot of duplication. In twitter, you get bombarded by it. So far, since i started writing this post, 106 new tweets have landed in the list.

In the world of RSS we handle mass duplication by picking a select few outlets. We handle it the same way with newspapers – we buy the same newspaper all the time. I buy the Sunday Times every Sunday. Why?? Because its a respectable news outlet, whose commentary I enjoy. Its rather like subscribing to Endgagdet rather than Mashable because I prefer the jokes.

Then there is the tech-news-people list. Which is people like Ryan Block of gdgt etc. As I memorably said to Scoble earlier today: 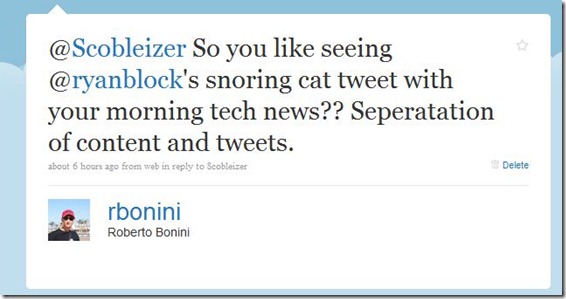 I don’t. There is a reason that I have a “comics” category in Google Reader.

Scoble has solved this problem by having a brand news list and a people news list. How practical is this solution?? It depends on how many screen you have  to watch twitter on. Now Scoble tells me that he was using his iPhone at the time of this particular exchange.  Scoble has 40 lists as of time of writing. How practical is this?? Hold that thought.

So what is content?? Is it tweets?? Clearly not since tweets simply point elsewhere.

If you click on my google reader links in my tweet stream, you’ll notice it takes you to Friendfeed first. This actually an option you can toggle. So i could make the short link take you straight to the source. I’ve pondered many times if I should do that.

(Yes – that is feedly running in Chrome)

Which is the better experience??

Since we’re talking about Tech news:

Lets compare this to one of Scoble’s lists:

To make this a totally fair fight, lets use Google’s Reader’s Sort By Magic function:

Which way of reading RSS feeds brings you the most value??

Which tech stores or highlighted the best here??

Of the three ways, I prefer Feedly. 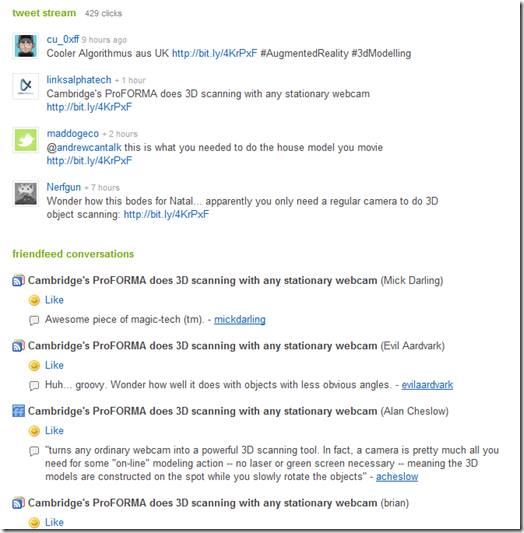 As you can see, at the bottom of every post, feedly includes this summary of the article’s impact around the web.

At a glance you can see exactly what people are saying about a particular article. Once Twitter Retweets are included, this feature is going to be even more useful.

Reading RSS isn’t just about following masses of feeds or people, its about following the right feeds to get the good. A gold mine is only as good as amount of gold that is reachable. If you can’t get the gold, you may as a well not dig the mine.

We may disagree on this Scoble, but there is more than one way to do it. You may find that it suits you, but thats not the way the rest of us feel. Even if we count ourselves as part of the early adopter crowd.

Twitter Lists may be the latest shiny newfangled thing on the interwebs, but it will take time to use it to its full potential.

Its WordPerfect  all over again – just becuase we have 150 fonts does NOT mean we need to use all of them in the same document. Just because we have Lists does not mean we jump our RSS ship.

To each his own RSS Reader.

6 thoughts on “To Each His Own RSS Reader”