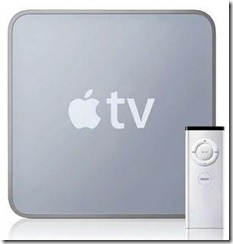 I just left this reply to this post on the GeekTonic blog discussing the AppleTv rumors that will not die.

Well… 1080i or p is only really viable if you have cable internet… and its a really small market. So 720p is pretty much a good bet as the default res.

I don’t care what anybody says – I ain’t streaming movies. Not with a 15gb fair use download cap. I’m getting a local copy of everything. Download once re-use all over the house. However, a 16Gb capacity is barely enough for the photos I have on the Apple Tv. Currently I play all my TV shows off the server rather than sync them. So while not being able to cache much content locally on the device, as long as i can download a copy to the server, I’m happy.

An App Store would be great – though I would assume it wouldn’t be backwards compatible with older AppleTvs – since it would require apps to be recompiled ( or even re-written) for the older hardware/CPUs.

The $99 price point is also awesome. It does open up the market. Its under the psychological $100 barrier – so people will be more likely to buy it.

The form factor is a persistent rumour – however I don’t see the logic of it. Given the clutter in the TV closet, there’s a real chance of me loosing it. However it will be a boon to those who already have too many set-top boxes in their Tv closets – look out for Steve to mention this prominently in any event. I still think its possible that Apple may keep the current form factor in some way.

However, unless the new Apple Tv ( or as you say, iTV) launches with some really awesome apps that will be worth the outlay of $99, I can’t see myself rushing out to buy one. Since we got satellite Tv installed with the accompanying HD-PVR a few weeks back, the use of the AppleTv has declined a lot – like 2 or 3 times a week as opposed to every day. Purchases sinc3e can be counted on one hand.
So a bit of a mixed reaction to this.

One thought on “Quick thoughts on the AppleTv rumours.”